Promoters Britt Cummings and Gaylon Rolison of the Inaugural Great American Guaranteed Million are pleased to announce that SDPC Raceshop and Chevrolet Performance Parts have partnered with the GABR as title and presenting sponsors of the highly anticipated event.

The SDPC Raceshop Great American Guaranteed Million Presented by Chevrolet Performance Parts is slated for October 6-11 at Memphis International Raceway in Memphis, TN. The event has sold all 450 entries offered with a host of racers on a alternate list hoping to get in.

“Britt has worked his tail off working closely with the fine folks of SDPC Raceshop to get the highly profiled sponsorship secured,” Rolison explained. “The GABR currently has a solid relationship with SDPC Raceshop as they are title sponsors of the ever so popular Dream Team Challenge Event. To build on that relationship through the Guaranteed Million Event with Nicky Fowler, Marty Morris, Alan Bracey and the entire gang at SDPC Raceshop is a huge feather in our cap,” Rolison added.

“Scoggin-Dickey Parts Center, SDPC Raceshop, and Chevrolet Performance Parts are happy to be teaming up with Great American Bracket Race team once again. Britt Cummings and Gaylon Rolison plan and execute these events from a racers perspective. They think of everything and this extravaganza will not disappoint anyone. These guys plan on making it an EVENT to beat all events and we are glad to be a part of it. There are million dollar races and then there is the Great American Guaranteed Million! If you are not one of the lucky 450 racers, be sure and tune in live all weekend via MotorManiaTV.com,” added Morris.

In addition SDPC Raceshop will be presenting one lucky racer that participated in the Great American Guaranteed Million Weekend a 582 Head Hunter Engine valued at $20,650.00 at NO Additional cost to the winner!!!!!
You can also locate SDPC Raceshop on Facebook and Twitter. 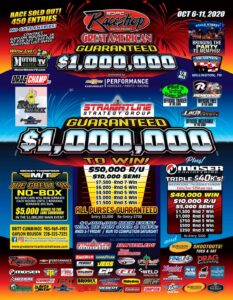 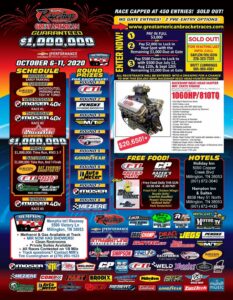